The headline NatWest Wales Business Activity Index – a seasonally adjusted index that measures the month-on-month change in the combined output of the region’s manufacturing and service sectors – registered 53.6 in June, down from May’s reading of 56.1. Latest survey data signalled a sixteenth consecutive month of Welsh private sector expansion. Some firms linked growth in business activity to sustained improvements in demand conditions.

That said, the rate of growth eased to a six-month low amid reports of supply constraints and a slowdown in new order growth due to the rising cost of living. Overall, the rate of increase in activity was broadly in line with that recorded for the UK.

Private sector firms in Wales registered a mild increase in new business in June. Overall, the pace of growth was the slowest in the current 16-month sequence of expansion. Anecdotal evidence suggested that the easing in new order growth stemmed from rising costs and inflationary pressures.

The expansion in new business across Wales was also among the strongest of the 12 monitored UK areas, behind only London and the South East.

June data pointed to stronger expectations regarding the 12-month outlook for output across the Welsh private sector. The level of optimism picked up from May amid reports of expansion plans, new product launches and strengthening demand conditions.

Job expansion across the Welsh private sector continued for a fourteenth consecutive month in June. The rate of growth was strong overall and a stark contrast to the stagnation seen on average across the survey history. Welsh privates sector firms reported increasing their staffing levels in response to rising demand.

June data signalled a second consecutive fall in the level of outstanding work across the Welsh private sector. Moreover, the rate of reduction accelerated from May and was the fastest in 16 months. Some firms linked the decline with the easing of supply chain disruptions. Notably, the fall in backlogged work was largely driven by the manufacturing sector.

Overall, the rate of at which backlogs were cleared was among the strongest of the 12 monitored areas, beaten only by the North East and Northern Ireland.

Average input costs faced by Welsh private sector firms increased further in June. Despite easing from the record high in May, the rate of cost inflation remained sharp and the among the highest across survey history. Survey respondents linked higher energy, oil, and raw material costs to the rise in input prices.

Moreover, June data indicated that the rate of inflation in the Welsh private sector was among the sharpest of the 12 monitored UK areas. Only Northern Ireland and the North East recorded steeper rates of cost inflation.

Welsh companies reported a further surge in prices charged across the private sector at the end of the second quarter. The rate of inflation slowed from May but was the second highest in survey history. Anecdotal evidence linked price hikes to firms passing on part of the rise in cost burdens to their clients.

The uptick in output charges across Wales’s private sector was the third-fastest seen across the 12 monitored UK areas. In line with the trend of input prices, only Northern Ireland and the North East recorded quicker rates of selling price inflation. 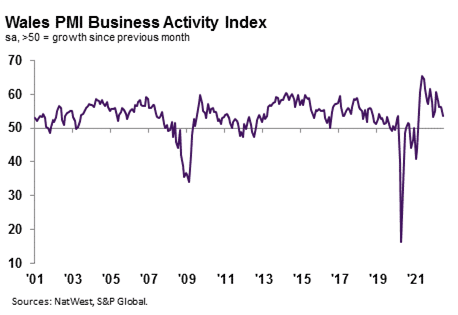 “On the positive side, June data indicated solid growth in employment levels and an optimistic outlook towards future output.”