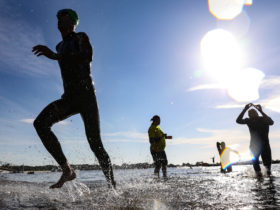 National Dance Company Wales (NDCWales) have announced that on Friday 24 July – the day that should have been the Opening Ceremony for the 2020 Olympics in Japan – the Company will be showing its heartwarming, joyful, highly acclaimed dance piece Dream, by renowned choreographer Christopher Bruce CBE, on Facebook and YouTube.

NDCWales will be broadcasting on Facebook and YouTube the 23-minute film of Dream, which was originally commissioned as part of the 2012 Cultural Olympiad.

NDCWales wants to mark what would have been the start of the 2020 Olympics by offering an Olympics experience through dance. Dream is full of references to bygone school sports days and street parties which involved mums,dads and neighbours embarrassing their children in the egg-and-spoon and sack races.

Choreographer Christopher Bruce CBE, wrote in his original programme notes, “With the London 2012 Olympics taking place in the Queen’s Jubilee year, I found myself thinking back to celebratory street parties in the early 1950s.

The training of athletes and dancers has many similarities, but as with all competitors and performers it begins with a dream which they have to work hard to realise. So, this is a recognition of two important events in British life, the 2012 Olympics and the Jubilee. However, it is a celebration of the sheer enjoyment of highly physical movement in all its forms.”

The 1950’s vintage costumes and sepia lighting hark back to days of Jubilee celebrations and summer fêtes. Dream is set to Ravel’s Bolero and Lent, the last movement of Valses Nobles et Sentimentales and climaxes with the second movement from Penillion by Welsh composer Grace Williams.

Dream was originally performed as part of Dance GB in 2012 – a showing of the best dance from across England, Scotland, and Wales. It went on to tour throughout the UK in 2012, and onto China later that year.

Associate Director Lee Johnston, who was a dancer with NDCWales in Dream in 2012 said, “Dream was an absolute joy to create and perform – as Ravel’s Bolero builds, so did the visceral thrill of both the dancers and audience – we could feel everyone dancing each movement with us as we sprinter from swimming to rowing to tennis, anticipating when laughter and applause could no longer be contained and would burst out across the auditorium. We are so proud to bring it to the digital stage, to make the occasion when the Olympics should have taken place, and offer this uplifting Olympics dance experience at a time when joy is essential.”

Dream is being broadcast as part of NDCWales’ KiN:Connected digital programme, which has been sharing content for audiences, participants and artists to engage with. NDCWales has been premiering select productions online for the first time for audiences including Afterimage (by Fernando Melo), Rygbi: Annwyl i mi/ Dear To Me (Fearghus Ó Conchúir) as well as a live streamed Zoom version of Alexandra Waierstall’s of 2067: Time and Time and Time, and Ed Myhill’s Clapping, where the dancers joined together to create a dance piece from isolation.

Dream will be broadcast on Friday 24 July 7pm on NDCWales’ Facebook and YouTube. It will also be available via NDCWales’ Digital Hub for 2 weeks on its website ndcwales.co.uk.