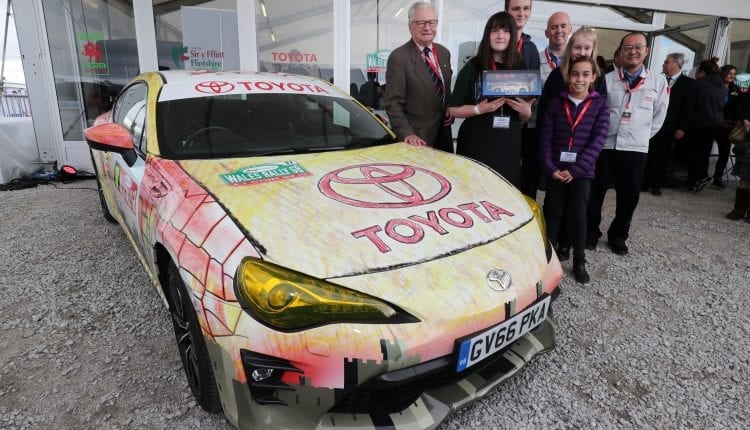 Wales Rally GB has once again joined forces with Toyota (GB) to reignite its exciting car livery design competition for young students, with the winning entry being applied to a real-life GT86 rally car. The highly successful initiative was first launched in 2017 and now enters its third year.

[aoa id=”1″]When liveried, the GT86 will be displayed within the Big Bang showcase located right at the heart of the event’s buzzing Service Park Headquarters in Llandudno where all the teams competing in the UK’s round of the FIA World Rally Championship (3-6 October) are based.[/aoa]

Jointly coordinated by the rally organisers and the Engineering Education Scheme Wales (EESW) on behalf of the Welsh Government, the inspirational contest is open to all primary schools, secondary schools and colleges throughout the UK with individual entry categories for Key Stages 2, 3, 4 and 5.

Winners of all four categories will be invited to Llandudno on Thursday 3rd October where they will be presented with rally goody-bag prizes and enjoy a special behind-the-scenes insight into one of the world’s most exciting and technologically advanced sports.

In 2017 the winning design was drawn by 12-year-old Rheinallt Jones from the Ysgol Gyfun Llangefni comprehensive school in Anglesey. Last year’s winner was Kirsty Campbell a 15-year-old GCSE student at Dorin Park Specialist SEN College in Chester. On both occasions the winning livery had a Welsh theme and was unveiled by Toyota GAZOO Racing WRC star Jari-Matti Latvala together with a Welsh Government Minister.

The partnership with Toyota is very pertinent as the company returned to the forefront of the FIA World Rally Championship at the start of the 2017 season and last year captured the FIA World Championship for Manufacturers title. Moreover, Toyota is Wales Rally GB’s ‘Official Car Partner’ for the third year in succession.

Toyota has also been a big supporter of the well-established Big Bang exhibition which sees a number of proactive businesses motivating hundreds of students from local schools studying STEM subjects.

“The livery competition has been a huge success, producing many excellent entries and two very worthy winners – that’s why we are so delighted to be continuing the scheme with Toyota’s support in 2019,” said Hugh Chambers, Chief Executive of Motorsport UK, organiser of Wales Rally GB. “It is one of the many ways in which we maximise the presence of a major World Championship event in north Wales to the considerable economic, social and educational benefit of all those in the region.”

Students wishing to enter the special livery competition can download an entry form as well as design templates and further details from either www.stemcymru.org.uk or www.walesrallygb.com via the ‘Spectators’ and ‘Big Bang’ navigation.

With a closing date of Friday 9 August, keen entrants have a couple of months to finalise their designs.

While open to students nationwide, to encourage as many Welsh educational establishments to engage as possible, EESW is proactively promoting the scheme to schools and colleges within Wales via the distribution of bi-lingual leaflets and with the provision of further information online.

Younger fans can savour the thrills of World Championship motor sport with accompanied children aged under 16 offered FREE admission to all the spectacular special stages. What’s more, admission to the buzzing Service Park in Llandudno as well as the Ceremonial Start on the Liverpool Waterfront are free for all ages.

Nothing stops a Macmillan Coffee Morning as the annual…