The headline NatWest Wales Business Activity Index – a seasonally adjusted index that measures the month-on-month change in the combined output of the region’s manufacturing and service sectors – registered 60.7 in April, up notably from 55.1 in March, to signal the steepest expansion in output since data collection for the series began in January 2001. Panellists suggested the uptick in business activity was linked to the relaxation of COVID-19 restrictions and greater client demand, especially for those in the service sector.

Welsh private sector firms registered a marked upturn in new business during April. Panellists stated that the further rise in new orders was linked to greater client demand, the relaxation of COVID-19 restrictions and the reopening of many businesses. The rate of growth was the steepest since April 2015 and only slightly below the UK average.

Output expectations remained relatively marked in April, despite the degree of optimism slipping slightly from March’s recent high. Nonetheless, the level of confidence was the second-strongest since February 2014. Anecdotal evidence suggested that hopes of an end to lockdown restrictions and the release of pent-up demand supported positive sentiment. The degree of confidence was among the lowest of the 12 monitored UK areas, however.

Welsh private sector firms signalled a further contraction in employment during April, thereby extending the current sequence of decline to 14 months. The ongoing fall in workforce numbers was linked to efforts to cut costs amid lower turnover since the pandemic. The decrease in staffing levels was in contrast to the trend for the UK as a whole which saw a strong expansion. That said, the downturn in employment across Wales was the slowest in the aforementioned sequence and only marginal.

April data signalled a second successive monthly expansion in backlogs of work across the Welsh private sector. The rate of accumulation accelerated to the strongest for over four years and was quicker than the UK average. Alongside greater new order inflows, firms stated that raw material and component shortages stymied the ability to process incoming new work.

Welsh private sector firms registered another marked monthly increase in average cost burdens at the start of the second quarter. Panellists stated that the rise in input prices was due to raw material shortages, higher fuel costs and greater shipping fees. The rate of cost inflation remained marked and was the second-fastest since January 2017, having eased slightly from that seen in March.

Private sector firms across Wales registered a slower rise in output charges during April, but the rate of inflation was nonetheless the second-sharpest since February 2020. The strong rise in charges was commonly attributed to the pass-through of higher costs to clients. 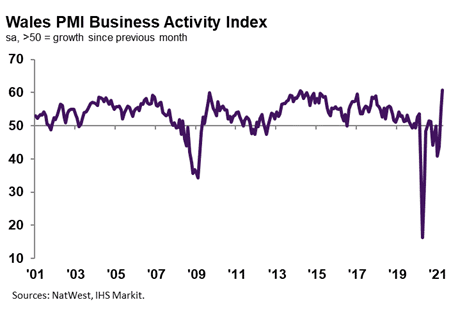 “The relaxation of lockdown measures provided Welsh firms with an additional boost to client demand, with output growth soaring to a series record. New business itself rose at the sharpest pace for six years amid the reopening of many companies across the service sector. Consequently, pressure on capacity was exacerbated and backlogs rose solidly.

“Nevertheless, intense cost pressures led firms to show hesitancy regarding hiring, as employment fell further amid efforts to rein in expenses. Although the rate of cost inflation eased, it was the second-fastest in over four years and far outpaced the rise in output charges, pointing to further pressure on margins.”