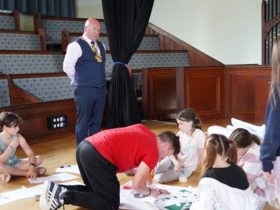 An exciting discovery has been made, in the run up to Halloween, at Llancaich Fawr in Nelson.

Hundreds of ‘witch marks’, used in the past to defend a house against evil, have been discovered in the Tudor manor house.  The discovery was made at the Caerphilly county borough visitor attraction by Alicia Jessup, one of the site’s historical interpreters.

The witch, or apotropaic, marks have been scribed into wooden beams and panelling, stonework and even ancient plaster.  Many of these marks are around chimney breasts and window and door frames once thought to be the most likely places that witches and evil spirits could enter a household.

‘Marian marks’ have been discovered in the manor house, which take the form of overlapping v’s invoking the protection of the Virgin Mary.  Two mesh designs have also been found known as ‘demon traps’, thought to have the power to imprison demons, as well as crosses, circles and even the shape of a coffin.

Most of the marks, however, are deliberate scorch marks which were once dismissed as accidental; with hundreds dotted around the house in dark corners.  One tiny attic space once used as a servant’s bed chamber is particularly intriguing; there are over 130 scorch marks on the beams and door frame alone. There is a small draw bar which would have been used to lock the space from the inside; even the inside of the socket is scorched. Whoever was sleeping in this space must have been absolutely terrified of something.

It seems that almost every nook and cranny of the house has some form of protection from evil spirits. During the renovation of the house in the 1980’s several discoveries were made such as children’s shoes hidden under a staircase alongside pieces of cloth, iron objects and even animal parts.  Also uncovered in a fireplace was a large quantity of human hair, a hare’s foot and a twist of paper which may have had a charm written upon it.  A mummified cat was even discovered in one of the walls in the 1950’s!

“It’s incredibly exciting, the more we look the more marks we’re finding.” said Alicia, “The sheer number and different types of marks are staggering.  It’s amazing to think that a building that has been studied for so long still holds so many secrets.”