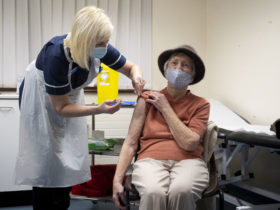 From struggling to form sentences to a speaking part in his school play – the last few years have been a real journey for RomanAubrey-Cooze.

Roman, from Swansea, has verbal dyspraxia, a speech sound disorder that affects children’s ability to learn and coordinate movements for speech.

It left him struggling to make friends from the age of two at nursery and answer simple questions, like “What’s your name?”.

Now thanks to help and support from speech and language therapy, seven-year-old Roman can produce sentences clearly.

And he has achieved a huge milestone – taking part in his school play.

When Roman was very young, his mum Emma Aubrey-Cooze noticed he could not produce as many sounds as children of a similar age.

She raised concerns with her health visitor and after an assessment, Roman was offered a short block of speech and language therapy sessions.

Emma, from Fforestfach, said: “When Roman wanted to tell me things, he would point and produce a grunting sound.

“If he wanted a drink, he would just point to his mouth.

“One story which will always stick with me was when Roman was stung by a bee in the park. Despite his best efforts, he was so upset, but he could not tell me what had happened – he could not get his words out.

“This made me really worried. I would think of scenarios, especially if he got lost in public, as he would not be able to tell a stranger his name.”

When Roman joined nursery soon after his third birthday, his teacher also recognised he was having difficulty communicating verbally.

She was concerned he would not be able to access the curriculum, as he could not say his own name.

This also made it difficult for him to make friends and this communication barrier was having a negative impact on his everyday school life.

With support from the school, Roman was offered another short block of speech and language therapy sessions – and it was these sessions where his therapists noticed he was showing signs of verbal dyspraxia.

Emma said: “I researched this and found out that a child who suffers with verbal dyspraxia knows what they want to say, but when they try to say it, something completely different or nothing at all comes out. This described Roman perfectly.

“Family members even struggled to understand him.”

Emma was told that children with the condition can develop clear speech with the right help.

In Roman’s case, that would involve a high level of speech and language therapy and years of practice.

At the age of five, it was agreed Roman would have three direct visits a week in school from speech and language therapist Moya Thomson.

He would also receive daily support from a teaching assistant who worked closely with Moya to develop his speech sound skills.

Roman has since progressed in leaps and bounds and has had a speaking role in his school play.

During his therapy sessions Moya and Sue made a visual picture of the sentence he needed to learn for his play.

This was repetitively worked on for weeks to achieve “Hooray I scored.”

Emma said: “There wasn’t a dry eye in the house as mums and dads who had grown to know Roman could see what an achievement this was.”

Achieving the eesound was difficult, but he got there with fantastic support from Moya. Soon after, he was able to say his own name and those of family members, pets and friends.

Moya said: “Roman’s confidence has come a long way. He can now communicate his needs more clearly, which has decreased his levels of frustration.

“It was really important for us to focus on saying family members’ names in our sessions, plus school vocabulary and phrases to ensure he was able to confidently participate to answer the register, and join in with school assemblies.”

Roman’s great progress means Moya now only sees him for one session a week.

She said: “He still has a few speech sound targets to work on but the focus is now developing his use of expressive language, in particular his use of grammatical endings and sentence structure.”

Emma praised the support Roman had received from Moya and the teaching assistant, saying it had been an invaluable part of his journey.

Emma said: “They have been engaging and motivating him week after week – team work makes the dream work.

“They’ve become like family to Roman and me. Without them both, he wouldn’t be where he is today.

“Roman now has so many more opportunities and we couldn’t be more grateful.”

Kathryn Ellis, ABMU lead speech and language therapist for schools, joined Emma to recognise how everyone working together had transformed Roman’s communication.

She said: “What an amazing team effort from Emma, Roman, Moya and school staff.

“We’re delighted to celebrate the difference speech and language therapy can make.”