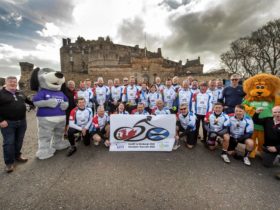 Further details of ‘Epilog’ have been released today – including the names of the artists who will be performing in this special one-off show, which forms part of Festival of Voice 2018.

Based on a forthcoming compilation album curated by record collector and radio producer Dyl Mei, Epilog (New Theatre, Friday 15 June) will be a unique opportunity to relive a golden period in the history of Welsh language pop music.

The 70s and 80s in Wales saw a unique phenomenon establish itself as the predominant collective musical voice of the era – the rock opera. Based often on Welsh folklore and, in many cases, ‘The Mabinogi’, these rock operas brought together members from the biggest Welsh language bands of the era in a collective spirit of pushing boundaries using joyful choruses, heartbreaking ballads and incredible narratives. All these rock-operas became successful albums and TV productions in their own right and have continued to be performed in schools and at amateur local level ever since.

Epilogwill bring together original cast members from various rock-operas who remain iconic figures in Welsh pop history, for the first time for a special one night celebration of the songs.

Folk-pop band Ac Eraillwill make an extremely rare appearance together on stage since they split up in the late 70s, along with female pop sensations Sidan who last appeared on the stage in the the 80s. Now a famous actress, Gillian Elisawill make a rare singing appearance on stage. Joining them will be Meic Stevens, Heather Jones, Cleif Harpwood, Delwyn Sionand Tecwyn Ifan, with more to be announced.

Songs will be drawn from the big rock operas of the time such as Nia Ben Aur, Melltith ar y Nyth, Gorffennwyd and Jiwdas as well as others that were never recorded or released such as Etifeddiaeth Drwy’r Mwgand Yr Anwariaid.

New arrangements have been written and will be performed by musician and arranger Gruff ab Arwel(Bitw, Y Niwl, Gruff Rhys etc). All songs will be woven together with a specially commissioned narrative by author and broadcaster Hywel Gwynfryn(himself the author of the lyrics of several of the rock operas), whose son – Huw Evans – more famously known as recording and performing artist H Hawkline, designed Epilog’s iconic artwork.

Alun Llwyd from Turnstile Music, who is producing the event, says:

“This night will be a total one-off. A celebration, a trip down memory lane but ultimately a unique chance to savour the incredible songs of this era and genre”.

Epilog is presented by Festival of Voice, a biennial international arts festival created by Wales Millennium Centre, taking place in various venues across Cardiff from 7 – 17 June.

Festival of Voice promises to be a beacon of fresh ideas and invites local and international artists and audiences to come together to hear and be heard across eleven days. Encouraging a spirit of discovery, performances will take place in existing arts venues, pop-up spaces and unique sites across Cardiff, including a three-floor vintage market, a TV studio, and one of Wales Millennium Centre’s backstage rehearsal rooms.

For tickets and further information, visit festivalofvoice.wales or call 029 2063 6464.