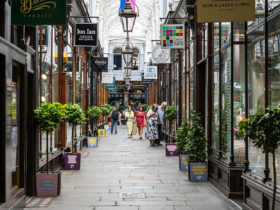 Between 27 May and 1 June, over 10,000 children will be heading to the Red Dragon Centre, where they will use the centre’s facilities for rehearsals and preliminary rounds during the annual Urdd National Eisteddfod.

The Urdd National Eisteddfod has become one of Europe’s most prominent youth touring festivals. Each year the festival in Wales attracts around 90,000 visitors throughout the week.

With a focus on families and young talent, the festival will see over 15,000 young people under the age of 25 compete to reach the stage at the Wales Millennium Centre.

Situated in the Cardiff Bay entertainment centre, Odeon cinema will offer six screens to young competitors in the mornings, giving them a unique opportunity to perform in front of their own, private auditorium. Film screenings throughout the week will not be impacted and will continue to be shown.

Visitors and supporters can enjoy an early breakfast in the Red Dragon Centre, as Bella Italia, Oriental Garden, Cadwaladers and The Cardiff Bay Tavern open at 7am during the week of preliminary rounds. Five Guys will be serving their usual menu from 9.30am.

Aled Siôn, Director of the Urdd Eisteddfod, said: “We’re very grateful to Odeon and the Red Dragon Centre for providing us with this space. Our young competitors train for months in advance and it is wonderful to be able to give them the opportunity to perform in the cinema auditoriums during rehearsals and preliminary rounds.

“The atmosphere and number of seats will give them a good impression of what they can expect should they reach the final round where they will perform in front of thousands of people at the Wales Millennium Centre and the audience at home.”

Nick Price, General Manager at Odeon Cinema in the Red Dragon Centre, said: “We are looking forward to supporting this national showcase of young talent, which many families in Wales attend each year.

“It will be a great experience for the young people who’ll use the space and highlights that cinemas can be used for various purposes. This is an exciting opportunity for the Red Dragon Centre and Odeon Cinema and are pleased that the Urdd National Eisteddfod considered us a top choice for rehearsals and preliminary rounds.”

Performers will showcase their talents during the Eisteddfod competition after being selected from amongst 40,000 children in Wales in the local and regional pre-rounds.

Throughout this period, the cinema will continue its film screenings as usual. These include upcoming films ‘Rocketman’ (24 May), Disney’s life adaptation of Aladdin (24 May) and The Secret Life of Pets 2 (24 May).

Entry to the Urdd site is free this year and tickets to the preliminary rounds,  the main stage at the Wales Millennium Centre, as well as concerts and shows can be bought here.