Many Ghostbusters fans were left bitterly disappointed after Paul Feig’s 2016 reboot failed to recapture the spirit of the original films.

It was a box-office bomb which resulted in losses of $75 million for Sony, and the studio subsequently scrapped the idea of making a sequel in order to focus on continuing the original series. This has led to Ghostbusters: Afterlife, which is known as Legacy or From Beyond in certain markets. The movie, set for release in March 2021, has the potential to help viewers get over Feig’s disappointing offering.

What Do We Know About the New Title?

One of the most important things to note about the upcoming sequel which is being billed as the third Ghostbusters film is the fact that the original director is back on board. Ivan Reitman directed Ghostbusters and Ghostbusters II, and now he is back as the producer of the upcoming offering. His son, Jason Reitman, is in the director’s chair for Afterlife.

Another thing which will appease those who loved the first Ghostbusters films is the fact that the stars of those iconic pictures will be returning. Bill Murray, Dan Aykroyd, Sigourney Weaver, Ernie Hudson, and Annie Potts will all be reprising their roles from the original. The third instalment in the series is set more than three decades on from the first picture, and will centre on the grandchildren of one of the original team members as they unearth clues about their ancestor’s legacy.

Sony Could Not Give up on This Franchise

Even though 2016’s Ghostbusters was a resounding failure, Sony was right to keep going with the franchise. The all-female offering did produce losses, but it could be argued that it helped rekindle the franchise in other areas. Thanks to the iconic films from 1984 and 1989, the Ghostbusters brand is highly recognisable. For this reason, it has been used as a way to sell related media.

The gaming industry, for example, has more than 18 Ghostbusters titles. Ghostbusters Plus is a popular online slot at Buzz Bingo which uses themes from the original pictures. Some of the symbols include Murray’s Peter Venkman and the legendary Ghostbusters logo. One of the most recent mobile games was the 2018 Ghostbusters World, which was an augmented reality game in the same vain as Pokémon Go. Two years prior to that, Ghostbusters: Slime City was released for handheld devices. The offering developed by EightPixelsSquare allowed players to choose a Ghostbusters member and go on missions fighting apparitions around New York City.

With so many big names from the original movies on board, along with a fresh take on the franchise, the new Ghostbusters film has the potential to do the series justice. Next year’s offering could bring in a whole new audience for the franchise and lead to a great number of other titles in the series. It would be fair to assume that there will be a few new games as well. 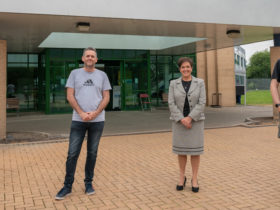